When George Romero wrote “Night of the Living Dead” he called his zombies ghouls. Little did he know those ghouls would go on to inspire a completely new type of monster movie spanning decades in terms of popularity and inciting terror in the masses.

One Calgary filmmaker decided to carry on that proud tradition and make his own zombie flick.

KJ Kleefeld was born in Calgary, then moved to Los Angeles to study film and stayed for 16 years. He’s made six short films and “The Dead Mile” is his first feature-length film. The film was shot at locations all over Calgary, including some scenes at Mount Royal University.

Kleefeld took some time to speak to The Reflector about working on his latest project.

‘Flec: “Zombie culture” has absolutely exploded over the past decade. What do you think attracts people to this archetype monster? 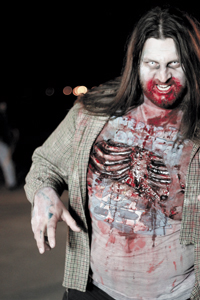 People came from as far away as Edmonton to be transformed into director KJ Kleefeld's walking dead in his feature-length film "The Dead Mile," shot in Calgary. Photo: Jonathan Vern McGill

KJ: I think what attracts people to zombies is that they’re able to see themselves. It’s a human being in its most primal form. Eat meat. Rip living flesh from the prey’s warm body. That’s frightening and intriguing. Plus I think we’re preparing ourselves for human overpopulation when there’s nothing to ea

t but each other. We all know it’s coming.

‘Flec: Is there something that makes the zombie different than all the other types of villains? And does that affect the way an audience reacts to them?

KJ: Yeah, being a human being and having to face another human while they eat you is scary. As humans we eat other creatures every day, but thinking about it is freaky. I think being eaten alive is absolutely terrifying, but since both sides of the fence are human, which choice does the audience choose? We can be either one. Some love zombies and some people are terrified of them.

‘Flec: Which type of zombie are The Dead Mile’s zombies and why?

KJ: The Dead Mile zombies are a combination of different living dead. I consider Invasion of the Body Snatchers a zombie film and I’m on the fence as to whether Jason from Friday the 13th was a zombie or not. I’ve kinda pulled a little from all the influences I’ve had from watching zombie-monster movies and created a new kind of zombie, one that’s true to the zombie mythology, but adds new characteristics.

‘Flec: Did you find people were excited to get involved, in particular to be zombies? Why?

KJ: Yeah, the support of people that were involved was amazing. People want to be involved in something creative and fun. This project invited them to do just that. There were a few people that came out almost all of the nights that we were shooting to be a zombie. One guy drove down from Edmonton and back three days in a row when we were out in Cochrane. Dan Doherty, from Reboot Inc., was made into four different Zombies. That’s awesome!

KJ: Both. The acting definitely has to be there. The actor has to let themselves go and dive into the character. They need to be committed to the type of undead they’re playing, but the makeup sells the look to the audience. We’re a visual culture. We need to see something in order to believe it.

‘Flec: Have you found Calgary to be a supportive place to make an independent film like yours? KJ: Yes. There are lot of very talented people here. The cast and crew were awesome. I couldn’t have asked for anything better. There’s also a solid support system here. There’s a great organization called CSIF (Calgary Society of Independent Filmmakers) that are willing to work with independent people. Having them involved definitely makes getting a movie made a possibility.

The team at Calgary Economic Development also worked with me along the way to make sure I was able to get the project done. I wouldn’t have been able to make this film anywhere else other than in the community of Calgary.

‘Flec: You wear a lot of hats as writer/producer/director of The Dead Mile. Was this a choice or was it something that became a necessity for your project?

KJ: I always like doing my own projects. That way I am there from beginning to end — I’m also the editor. It allows me to monitor the project on a number of different levels, but I also like to play with others. Meaning, I love hearing other people add their creative ideas to the mixture. Making a movie is a huge creative pot. If I wear the hat for these various positions, I am able to be in charge of allowing others to participate. I’ve been on a lot of sets where the people in charge have huge blow-ups over a creative decision or they

don’t want to hear anyone else’s creative idea. It’s their way or the highway. I don’t like that. If I’m in charge then I’m willing to play with others. So, in order for me to get the project done in a manner that works for me I guess it’s a necessity for me to be in those positions. I like the set to feel like a community.

‘Flec: What does the timeline look like from the beginning of your writing process to the distribution of the final product for this film?

KJ: I’d say it’ll be a two year process. It’s been a year since I started writing the film and once the edit is finished and we go to festivals. I’m sure it’ll be another year.

‘Flec: Given your typical, hypothetical zombie outbreak scenario: What weapon are you using, where are you going and with whom?

KJ: I’m grabbing a hockey stick with a few razor blades taped to the toe of the stick, heading straight to the hockey rink to get my razor sharp skates on my feet and playing a little hockey while knocking down zombies and hopefully having a group of sexy hockey cheerleaders in my corner cheering me on.