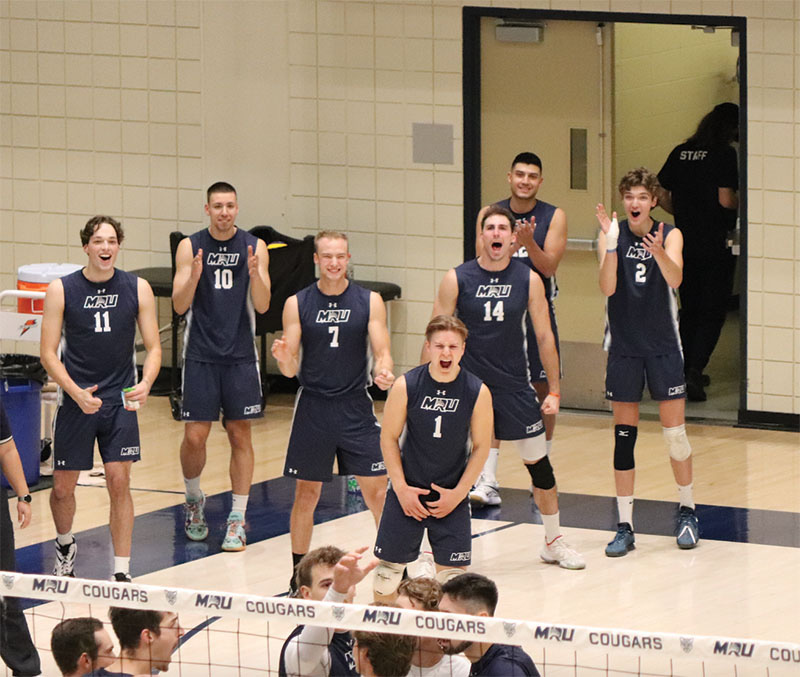 The Cougars men’s volleyball team celebrating on the sidelines during their home opener. Photo by Josh Werle

The men’s volleyball team has an ELO rating of 1649.84, while the women’s team sit at 1725.14. The ELO rating scale is based on the relative skill level of each team, and points can be added or subtracted based on a team’s overall performance. Although the men’s team have a strong ELO rating and rank fifth in the U SPORTS overall rankings, they currently rank in fourth place in the Canada West division. Although they are still undefeated and expected to keep their hot streak going, they only rank fourth in their division because the three teams ahead of them have played six games thus far, while the Cougars have only played four.

The women’s volleyball team also sit in fourth in the Canada West division, and have played the same amount of games as their closest competitors. Although there are a few teams who rank ahead of them due to the fact that they have lost a game, it clearly hasn’t affected their expectations for the team. Once they are able to get a few more games under their belt, the U SPORTS overall rankings indicate that this squad is one of the strongest teams in all of Canada.

Reigning Cougars MVP Chris Byam has gotten off to a strong start to the season, and looks to continue to be one of the most dominant forces on the court for the men’s team. He currently sits at 72 points, and averages 4.77 kills per set.

The women’s reigning MVP, Quinn Pelland, has been off to an incredible start as well. She’s recorded 164 assists, with an average of 8.2 assists per set. Fourth year player Nyadholi Thokbuom and fifth year player Madison Marshall have been the two primary offensive threats for the Cougars this season. Thokbuom leads the team with 78 points, while Marshall trails closely with 71.5. The two sit at 59 and 56 kills this season, respectively.

Overall, both Cougars teams are sitting in a great position early on in the volleyball season, and will look to continue their dominant streaks heading into the winter months.