The Mount Royal University Cougars soccer teams have had a strong finish to the 2022 season — the men’s team have gone unbeaten, while the women’s team have more than doubled their wins and goals statistics compared to the 2021 season — with both teams prepared to make it far in their respective playoffs. The teams will compete in the Canada West quarterfinals on Oct. 29.

The men’s soccer team finished the season with a record of 8-0-6, and finished at the top of the Canada West Prairie division. The team has continuously ranked in the U SPORTS’ top-ten rankings throughout the season — at the time of writing they sit in seventh place amongst all men’s soccer teams. Although the team’s offensive statistics fell ever so slightly when compared to last season, their defense has dramatically improved. The team only allowed seven goals to be scored against them all season long — nine of their games saw the team keep their opponents off the scoresheet entirely.

To accompany their stellar defense and goalkeeping, the team outscored their opponents by more than triple throughout the season. The Cougars dropped 23 goals on their competition throughout the season, which allowed them to go on their season-long unbeaten streak. Mohamed El Gandour and David Schaefer led the team in goals for the second season in a row, with El Gandour scoring eight while Schaefer scored six. The team will look to continue their dominant run throughout the playoffs.

This season is drastically different from last season, as the Cougars have more than doubled their win and goals scored this year. After finishing last season with a record of 3-7-2, the team stayed optimistic about what this year might look like for them. The optimism was certainly warranted, as the team finished as conference champions. 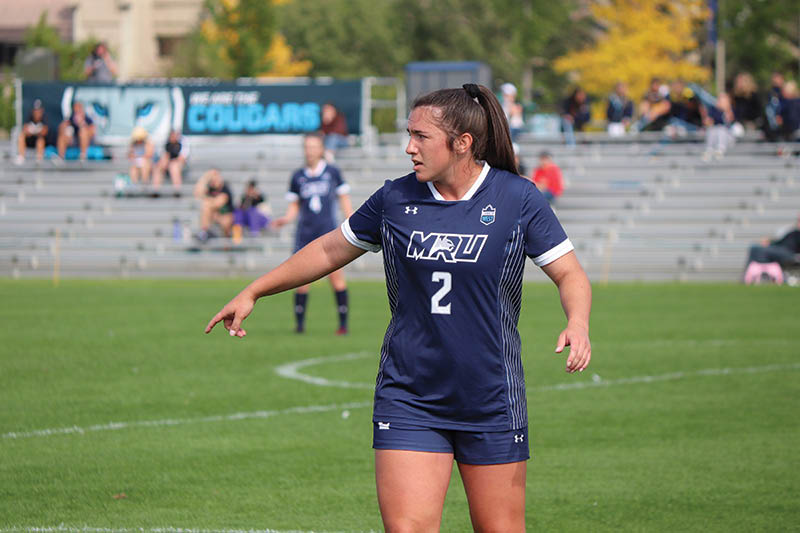 Catriona McFadden has been the Cougars’ leading scorer this season, and will look to
continue her dominance in the playoffs. Photo by Josh Werle

The offensive output was notably better, as the team finished with more than twice as many goals. After scoring only 13 goals during the 2021 season, the 2022 team finished with 29. This was primarily a team effort, but star players Sydney Danielewicz, Monet Alonso-Cruz and Catriona McFadden all had substantial offensive impacts. After leading the team in both goals and points in 2021, Danielewicz didn’t slow down during her sophomore season this year. She had nine points overall, with four goals and one assist. Alonso-Cruz, who is in her final season with Cougars, had a team-high five assists throughout the season. She finished second on the team in points with 11. McFadden’s Cougars debut was seemingly the biggest boost that the team needed, as she contributed a team-high 17 points. McFadden finished with eight goals and one assist, and will look to continue to be the team’s number one sharpshooter heading into the playoffs.