Jeremiah was a bullfrog: Long beards & nail clipper escapes are all the rage

A Canadian man is about to be rewarded by the Guinness Book of World Records for having the world’s longest beard. Swaran Singh’s mane of hair measures over seven feet long:

Elsewhere in Arkansas, a robber found out the hard way that robbing a Tae Kwon Do studio was a really, really bad idea (AP).

Disclaimer: If you’re a dude this next one will make you squeamish.
An enrage horse in Indonesia bites off a man’s testicle. “Luckily the horse did not chew up or swallow his testicle, but spit it onto the pavement,” a witness said. Yeah for sure, that’s lucky (The Daily Telegraph).

Swedish golfer Henrik Stenson decided to strip down to play his shot from the mud over the weekend at the WGC-CA Championship. Who says golf is a conservative game? (New York Times). 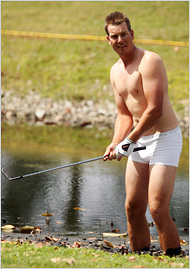